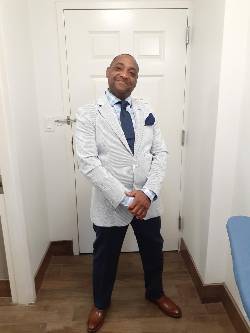 Father we stretch our hands to thee, no other help we know.  If you with draw yourself from us, we have nowhere to go.  With sorrow in our heart, the Davis funeral home, 301 North Oak street Ocilla, Georgia 31774 pause to announce the death of Mr. Carlos McClain aka Butter Bean. of Miami Florida formerly of Ocilla Georgia.

Mr. McClain received God's call from labor to reward on Friday January 14, 2022 at his home in Miami Florida.  Born April 30, 1966 in Ocilla Georgia to Mrs. Everline McClain Battle and the late Rev. Johnny Battle. He is survived by his mother Mrs. Everline McClain Battle of Fitzgerald Georgia.  His children: Ms. Cataura McClain, Mrs. Shantravia Samuels, and Mr. Aaron Streeter all of Miami Florida.  A grandson: Mr. Christopher Parker Jr. of Miami Florida along with a host of siblings, aunts, uncles, nieces, nephews, cousins, relatives and friends.  A home going celebration for Mr. Carlos McClain is planned for Saturday January 29, 2022 at 1:00 p.m. from the Ocilla city cemetery 301 East Valdosta Ave. Ocilla, where Rev. Willie C. Mobley will deliver the eulogy and committal.  Mr. McClain will lie in state at the Davis funeral home in Ocilla, Friday morning 10:00 until 6:00 p.m. and Saturday morning 10:00 until 11:30  Please continue to lift the McClain family up in prayer.  The Davis funeral home of Ocilla has charge of local arrangements.