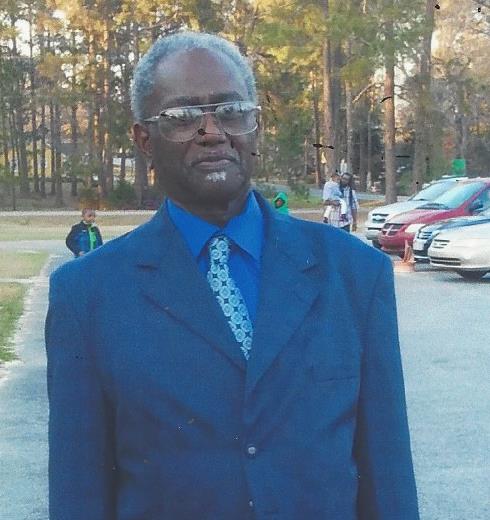 Servant of God well done, rest from thy love employ.  The battle is fought, the victory is won.  Enter thy master's joy.  A voice at midnight came, he started up to hear.  A mortal arrow pierced his frame, he fell but felt no fear. ( A true servant has gone to get his reward)  With sadness in our heart.  The Davis funeral home 301 North Oak street, Ocilla Georgia  31774 pause to announce the death and home going celebration for Mr. Roosevelt George of 805 East 6th. street, Ocilla Georgia.  Born March 23, 1943 in Ocilla, Irwin county Georgia to the late Mrs. Sallie Mae Walker George and the late Mr. Benjamin George.  Mr. George received his heavenly wings on Saturday afternoon August 7, 2021,at his home in Ocilla surrounded by his loving family.   Mr. George is survived by his wife of 28 years Mrs. Magaline Gaskin George of Ocilla.  Their children:  Mrs. Sallie Mae and Mr. Willie Scott of Ft. Pierce, Florida, Mrs. Susan Campbell of Fitzgerald Georgia, Mrs. Tracy and Mr. Victor Smith of Millen Georgia, Mr. Thomas and Mrs. Rhonda Brown of South Carolina, Mr. Terrence and Mrs. Jade Brown of Fitzgerald Georgia, Ms. Daisy Lawson of Ocilla Georgia, Ms. Angel George of Ocilla Georgia, and Mr. Howard George of Ocilla Georgia.  His siblings:  Mrs. Roxie Davis, Mrs. Ida Johnson, Ms. Ann White, and Mr. Jimmie George all of Ocilla Georgia. Mr. Benjamin White of Fitzgerald Georgia.  Sister in law, Mrs. Louvia George of Ocilla Georgia, along with a host of nieces, nephews, cousins, relatives and friends.  Home going service for Mr. Roosevelt George is planned for Saturday August 14, 2021 at 11:00 a.m. from the Ocilla City cemetery, 301 East Valdosta Ave., Ocilla. His pastor Rev. Calvin Ross will deliver the eulogy and committal. Mr. George will lie in state at the Davis funeral home in Ocilla Friday morning 10:30 a.m. until 1:00 p.m. and at Greater Grace Out Reach Ministries 617 East 4th street Ocilla, 2:00 p.m. until 6:00 p.m. The Davis funeral home of Ocilla has charge of all arrangements.  Please join us in keeping the George and Gaskin families lifted up in prayer.