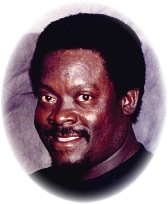 Eulogist was the Rev. Randy Shelley. Interment followed in Ocilla City Cemetery. John Cook, Jr., Buster White, Daryl Bryant, Tony Pitts, Clinton Bryant, Jr., Charles Holden, Terrance White and Arthur Smith served as pallbearers. Honorary pallbearers were employees of Tyson Vault & Monument Company. Music was provided by the church choir and soloists, Evelyn Anderson and Lameisha Gamble.
Mr. Bormus was born July 19, 1951 in Sylvester to the late Mary E. Smith and Ellis Bormus. He was also preceded in death by one sister, Rose Stubbin of Tifton and one stepdaughter, Janice Bryant. He later moved to Tift County where he met the love of his life, Catherine Bryant. They were united in marriage July 4, 1992 at the home of Aldene and Nella Tyson. He was employed by Tyson’s Monuments for more than 10 years until his health failed.
Mr. Bormus was well known and a loving person who was loved by all his family members and friends. He loved having fun and making others laugh. Survivors include his wife, Catherine B. Bormus of Ocilla; one daughter, Renee (George) Davis of Sparks; sisters, Ola Mae Nelms, Terresa Smith, Charlie Mae Smith and Carolyn (James) Graham, all of Tifton; brothers, W.L. Smith, Richard Smith, Christopher Smith and Arthur James (Vicha) Smith, all of Tifton; two granddaughters, Monee Tumbling and Erica Tumbling, both of Sparks; three great-grandchildren, Jazzlynn, Jaronte and Kaydan Tumbling of Sparks; two godchildren, Linda Gail Ewing Moss and L’Qwaviyon Moss of Ocilla; and sisters- and brothers-in-law, Carrie B. (Theodus) Sneed of Miami, FL, Ruth Gamble, Louvinia White, Columbus (Ernestine) Bryant and Carrie Bell Bryant of Ocilla, Lula Mae Davis of Ft. Lauderdale, FL and Melvinia Bryant of Atlanta. Davis Funeral Home was in charge of arrangements