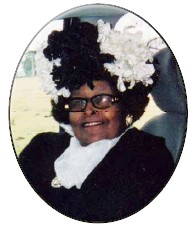 She furthered her education by attending Ben Hill Irwin Vocational School of Nursing, where she graduated and received her license as a LPN. Her work took her to Osceola Nursing Home, Fitzgerald Nursing Home, and Irwin County Hospital where she not only provided care to the sick but spread the love of God as well through ministry.

At an early age she joined New Bethel Lax Baptist Church of Lax, Georgia. Mrs. Johnnie Talton was a faithful servant of God. She attended church without fail and supported not only her church family, but the churches pastored by her late husband, Rev. E. Talton Sr., as well. She visited many churches, and local, state, and national conventions. She was a member of the NBLC choir and taught her children the joy of singing for the Lord as she spread the spirit through singing, through speaking, and through play writing and directing. She was the founding member of the Ocilla Women in White, a member of Eastern Star of Ocilla, and NAACP.